http://www.aurora-music.com/
Aurora Aksnes (born 15 June 1996), known as AURORA, is a Norwegian singer-songwriter and producer. Her debut EP Running with the Wolves was released through Decca Records in May 2015[1], receiving widespread approval from online music blogs and national press. Later the same year she provided the backing track for the John Lewis Christmas advert, singing a cover of the Oasis song "Half the World Away". This cover appears as a bonus track on the deluxe version of her debut studio album, All My Demons Greeting Me as a Friend, which was released worldwide on 11 March 2016.

Aurora Aksnes was born on 15 June 1996 in Stavanger, Norway. She has two older sisters, Miranda, a make-up artist [2], and Viktoria, a fashion designer.[3] She grew up in Os, a municipality in Hordaland close to Bergen. She began creating melodies at the age of six and began writing lyrics at the age of nine. "Running with the Wolves" was written in this early stage of her life.

Aurora's first track "Puppet" was released in December 2012, followed by her second, "Awakening" in May 2013. Her first single signed to her labels Glassnote Records and Decca Records, "Under Stars" was released in November 2014, and "Runaway" followed in February 2015. "Runaway" achieved success in the UK on streaming service Spotify, reaching one million streams after just six weeks. The track was also received positively by various online music blogs and national press such as the NME. Her next single, "Running with the Wolves" was released in April 2015 and received attention from national BBC stations Radio One, Radio Two, and 6Music[4]. The excitement surrounding the young songstress propelled her onto the festival circuit and she appeared at renowned summer festivals such as Way out West[5], Wilderness[6], and Green Man Festival[7]. Aurora's sixth single, "Murder Song (5, 4, 3, 2, 1)" was released in September 2015 and has received continued support from national press, on national radio, and popular online music blogs[8]. She has played a sold-out headline show in London and supported Of Monsters and Men at Brixton Academy in November 2015[9]. Aurora recorded a cover of the Oasis track "Half the World Away" for the 2015 John Lewis Christmas advert[10]. Her next singles, which came after "Half the World Away", were released in January 2016,"Conqueror" and "Warrior". A music video for "Conqueror" was uploaded the following month. Her debut album All My Demons Greeting Me as a Friend was eventually released on 11 March 2016, receiving generally positive reviews from critics. After releasing it, she went on to embark on her European tour, making a number of visits to the UK in between. She featured in British band Icarus' song "Home" and released a cover of David Bowie's "Life on Mars".

On 14 March 2016, Aurora made her American television debut on The Tonight Show Starring Jimmy Fallon, performing "Conqueror". Aurora soon after performed the track on Conan[11]. On July 25, 2016, she performed her cover of "Life on Mars" on The Howard Stern Show. The following night on 26 July, she performed "I Went Too Far" on The Late Show with Stephen Colbert.

On the day of releasing her debut All My Demons Greeting Me as a Friend, she said that it was "the first album of many" that she has planned. As of 12 May 2016, after coming back from her European tour, Aurora announced that she was ready to begin writing and producing more material, which will eventually form her second EP. She has said in a Facebook event that she has 15 demo songs and has written 1,000 songs/poems. According to Aurora, her second EP was expected to be released in the fourth quarter of 2018.[12]

Between April and August 2018, the singer released two singles, "Queendom" and "Forgotten Love", which were going to be included on her second EP.[13][14] Aksnes recorded the EP during her stay in France in January of that year, and the production included the producers Askjell Solstrand, Roy Kerr, and Tim Bran, with Aksnes herself also involved in this aspect.[15] Some of that new material was anticipated in live performances, including festivals like Lollapalooza and Coachella.[16][17]

While maintaining some of the themes and stories of the previous album, this production would mark the first time that Aksnes includes political themes and themes of sexuality in her songs. Most of the new inspiration for those came from the interaction that she had with her fans during her first musical tour.[18] The music video for "Queendom" saw its release in May 2018, and it included a message to her LGBT fans; such message was portrayed by Aksnes herself kissing one of her female dancers, during what was described as a "big kissing party" that shows that "every type of love is accepted and embraced" in the singer's "Queendom".[19]

On June 13, 2018, a cover of the song "Baby Mine" done by Aurora was featured in the teaser trailer for Disney's live-action "Dumbo" remake. The song would continue to be showcased in the following trailers for the film, but would not be included on the movie's soundtrack release. It still has yet to receive an official release outside of the trailer.

On September 28, 2018, Aurora surprisingly released her second album, Infections of a Different Kind - Step 1. The EP features eight songs[20] and the title itself comes from the eighth track included on it, which Aurora declared as "the most important song I've ever written".[21] Shortly after the release, the singer and her band went on a musical tour that started in Manchester, UK, headlined by Cub Sport.

In the months leading up to the release of her third album, Aurora released four of its tracks. Snippets of the song "Animal" were released between January 21 and 24, 2019, before the full track was finally released on January 24, 2019. Following it were songs "The Seed", "The River" and "A Different Kind of Human", released on April 5, May 10 and May 31, respectively. When she was promoting the new album in Australia three weeks before its release, she covered The Beatles' "Across the Universe" for the radio program Triple J, along with a live performance of "The Seed". Aurora's third album, A Different Kind of Human - Step 2, was released on June 7, 2019, and features eleven songs.

On June 11, 2019, the trailer for Disney's "Frozen 2" was released, and some fans noticed that the vocals in the background sounded very similar to Aurora's. Aurora then confirmed on her Twitter[22] and Instagram that it was indeed her. On September 30, 2019, the film's official tracklist was revealed, confirming AURORA was on it. Her vocals are featured in the film's theme song, "Into the Unknown", along with Idina Menzel, the voice actress of the main character, Elsa. The song received an Academy Award and was performed by Aurora and Idina Menzel o(as well as the other voice actors for Elsa from around the world) at the 92nd Academy Awards, along with nine others Elsa's voice actresses around the world. On March 4, 2020, she released her own full version of the song as a single.

Aurora collaborated with Gundelach on the single "Cynical Mind", released on March 13, 2020, and also present on his third studio album, My Frail Body, as the ninth track.

"Exist for Love" was officially released as the lead single from her upcoming Fourth Studio Album, which has yet to be announced, though it is expected to be released in 2021. She is currently continuing to work on the album and has even hinted that she is working on 3 separate albums simultaneously.

On November 20th, 2020, AURORA was featured on Herborg Kråkevik's Christmas album, Juleroser. She appears on two tracks: "Vinterens Gåte" (a song she wrote for the album) and "Det Hev Ei Rose Sprunge," a song she previously covered in 2017. That same day she shared on Instagram that she would return home soon from a trip to the mountains, where she had stayed for a few weeks to work on her upcoming album.

"Stjernestøv" was released a single on November 23, 2020 as part of NRK's Christmas TV series of the same name, Stjernestøv (Stardust).

In March 2021, AURORA's 2015 single "Runaway" went viral on the social media app TikTok. The song charted internationally and became AURORA's second top 40 song on the UK Singles chart. Due to it's success, two acoustic versions were released and advertisements supporting the song were run.

(You can find the main article on AURORA photoshoots here). 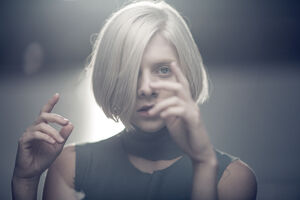 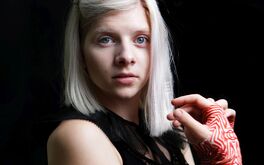 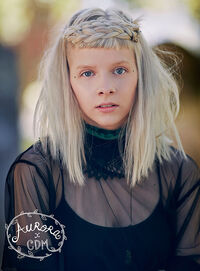 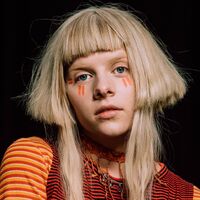 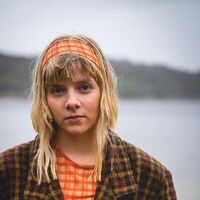 Retrieved from "https://aurora-aksnes.fandom.com/wiki/AURORA?oldid=10594"
Community content is available under CC-BY-SA unless otherwise noted.